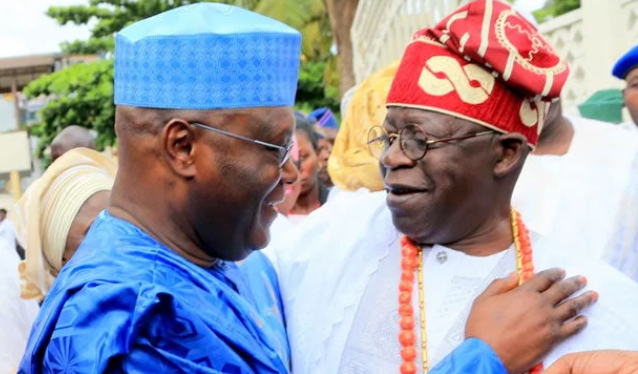 Tinubu, at an interactive session with the Arewa Joint Committee which was held at the Arewa House, Kaduna, on Monday, said he sees himself as a pan-Nigerian, having transversed all parts of the country.

He, however, noted, “You (apparently referring to Atiku) started from Uyo and now ended up in Kaduna and you are speaking to the North that you are the right candidate for the North; how do we reconcile that? You have lost the election.”

Tinubu went further to say that the PDP presidential candidate ought to have endorsed him, having supported him in 2007 for the presidency instead of competing with him for the same position.

“It’s payback time. Let Atiku endorse me instead of campaigning in Kaduna. I supported him in 2007,” he added.

The former Lagos helmsman told the gathering that comprised the Arewa Consultative Forum, Northern Elders Forum, Sir Ahmadu Bello Memorial Foundation,  Jamiyyar Matan Arewa, the Center for Historical Development Research (Arewa House) as well as the Arewa Research and Documentation Project, that he was also one of them.

Tinubu then recited the old National Anthem…’Though tribe and tongue may differ…’  to buttress his point of not portraying himself as an ethnic champion as his other opponent.

He said under his government, the rag-tag bandits terrorising the region would cease to exist, noting, “a rag-tag bandit will not defeat us. We will defeat them.”

Speaking further,  Tinubu said if elected as President, he would mobilise all assets within “our national power” to secure Nigeria.

“As you are aware, security is a function of resources. I am committed to mobilising all assets within our national power to secure Nigeria.

“We did this in Lagos through many initiatives, especially the Security Trust Fund, through which we addressed many needs of our security forces which helped to sanitise Lagos State.

“As you may recall, when I assumed office as governor in 1999, the situation I met was basically a case of banditry where urban gangs ruled the streets.

“I returned law and order, tamed what could have been a huge ethnic war and made Lagos one of the safest states in Nigeria. I will replicate that across the country,” he said.

He added, “We will address the welfare and training needs of our security personnel and strengthen our security institutions with modern technology and equipment to better position them to respond to modern challenges that we face in a fast-changing world.

“Under my leadership, the Nigerian military will receive a much-needed injection of trained personnel to strengthen the heroic efforts of the troops that are currently in service.”

On the economy, the APC presidential hopeful said the country is sitting on a gold mine with abundant natural resources, adding that “with strategic investment in research and development and effective management, we will explore and exploit these resources to the fullest.”

He said under his leadership, the Nigerian government would be business-friendly.

According to him, “We shall support private businesses in our country and attract foreign direct investment to create jobs, re-industrialise our country and accelerate economic development.”