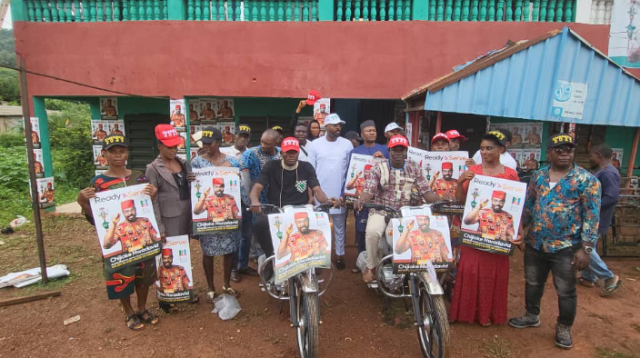 Nwadavid, an ECOWAS youth ambassador and founder of Necbullion Charity Foundation, gave the assurance on Friday at the APC Secretariat in Awgu during the inauguration of his campaign council. 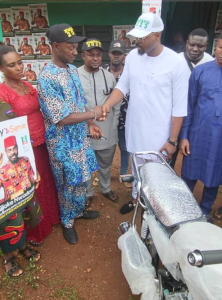 The APC House of Assembly Candidate said the choice of Charles Arukwe as chairman of the Campaign Council was because they both share same vision and his capacity to mobilise the people for the overall victory at the polls.

He said it was time the electorates elected leaders based on their antecedents not the political party they belong.

“I actually inaugurated this team because it goes to show that this particular election is not business as usual. And its not all about political party, it is about the individual. It is about someone that is credible, someone that can bring about positive change to the constituency.

“My antecedent is enough for them to be convinced, and to be able to convince other people. I am man of my word. I say what I can do. I am not the regular politician that will just keep saying things to please people or just say things to make people happy and lie to them, at the end of the day I won’t do anything for them”.

The candidate, who presented two motorcycles to the campaign council charged them to comb the nooks and cranny of the Constituency to sensitise and mobilise the people for the 2023 House of Assembly election.

Amb Chijioke NwaDavid said he has the capacity to deliver on his mandate as a legislator.

“My tract record has shown what I am capable of doing and the development I am able to bring to this community. That alone is enough conviction to these people.

“Then again we are ready and willing to support them and mobilise them fully in all ramifications for the success of this movement.

“With my experience as a youth ambassador to ECOWAS and I have been privileged to travel around various countries. I have seen that it cost nothing to bring development to any Community in the world”.

He said he will work towards the unification of Awgu South, provide inclusive representation as well as initiate quality bills for youth involvement in governance.

“There is something that I put up which I call Unification of Awgu South. I intend to unify Awgu South; provide all inclusive representation. That is part of what I intend to do. Then initiation of quality bills for involvement of youths in governance as well as creation of Awgu South Investment Company PLC to drive industrialization for job creation for our youths”.

“I will bring about mechanized farming, because I’ve seen that my people love to farm, investors down to Awgu South, whereby farmers can export their produce”.

On education, he said he will attract ICT centre to the area to encourage digitalisation of learning.

“I have set various ICT centres across the Nigeria and I want to put the biggest in Awgu South.

“I know as a lawmaker I don’t have the power to do projects but as a Federal government contractor I can attract those projects to this community,” he said.

In his acceptance speech, the chairman of the campaign council, Comrade Charles Ekene Arukwe assured that the Chijioke NwaDavid House of Assembly bid campaign will be taken to the door step of the people of Awgu South Constituency.

In his remarks, the Chairman of the campaign council, Arukwe, said thatvAmbassador Chijioke NwaDavid has the capacity to bring democracy dividends to the people.

“It is the electorates that will vote. So we will take the message to them. Door to door, family to family, kindred to kindred, we will to the market women, farmers, artisans and the churches to tell them that this is our candidate and the only person that will give us the needed dividends of democracy,” declared.