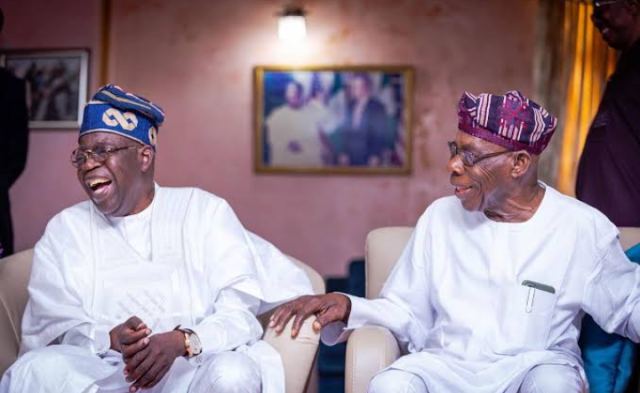 Former President, Olusegun Obasanjo has dismissed as fake news, a viral message where he was quoted as endorsing the political prowess of All Progressives Congress, APC, presidential candidate, Asiwaju Bola Tinubu and disparaging the military.

Obasanjo in a viral WhatsApp message was quoted to have said: “I am not a politician; I am a decorated soldier, an army general. If you are looking for thorough bred politician of masters class, visit Lagos Bourdillon, there you’ll find one…”

Reacting to the claim through his Special Assistant on Media, Kehinde Akinyemi, Obasanjo declared he never made any remark at the expense of his noble military profession.

According to Obasanjo,  “only the military trains personnel to be good managers of men and materials. So, I cannot disparage my noble profession for politics that has no formal training. This is false and fake.”

In his words “APC has nothing to tell Nigerians anymore, they have been blaming PDP for over seven years now without making major strides in changing the narrative; unfortunately, next year’s election is confusing”.

“2023 general elections will be confusing because of two basic factors; the Labor Party and Sufferings in Nigeria. APC has even forgotten that PDP is existing and their focus is now on emerging Labor Party”

“They know that Labor Party’s Presidential Candidate and Olusegun Obasanjo may be on common mission and the only way to confuse people is through Fake News”.

“In 2015, APC used fake news, fake promises and everything fake to get into power, sustaining the power is now the issue: lies have expiring date and 2023 is the date”.

“APC have exhausted all Their fake promises and there is nothing to promise Nigerians again; hence, they are now hyping Tinubu’s achievements in Lagos” he ended.