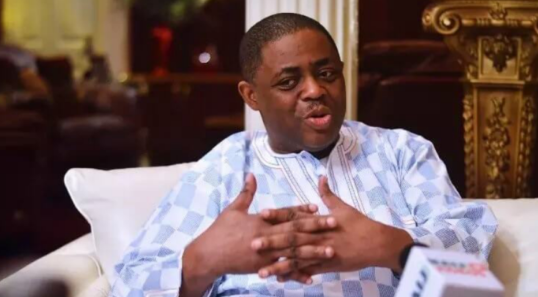 “Our next President is Bola Ahmed Tinubu. If you like it, clap for yourself. If you do not like it please go to Apapa and jump in the lagoon.”

Femi Fani-Kayode, Director New Media for the Bola Tinubu campaign, says those against the ambition of the All Progressives Congress (APC) candidate in the 2023 presidential election should go ahead and “jump into the lagoon.”

“Our next President is Bola Ahmed Tinubu,” Mr Fani-Kayode said. “If you like it, clap for yourself. If you do not like it please go to Apapa and jump in the lagoon.”

Mr Fani-Kayode’s comments are reminiscent of those of the Oba of Lagos, Rilwan Akiolu, during the 2015 governorship election in the state, when he threatened to drown voters of Igbo extraction into the Lagos lagoon if they refused to vote for the APC candidate.

The traditional ruler was speaking during a visit by Ndigbo community leaders in the state, a few days to the 2015 governorship election, considered a two-horse race between Akinwumi Ambode of the APC and Jimi Agbaje of the Peoples Democratic Party (PDP).

Long before Mr Fani-Kayode made this statement in a facebook post on Friday, Mr Tinubu, who would be up against Atiku Abubakar of the Peoples Democratic Party (PDP), Peter Obi of the Labour Party (LP) and a host of other candidates in next year’s general elections, had once said that supporters of the LP would “labour to death.”

It could be recalled that such statement from Mr Fani-Kayode’s lagoon comment once evoked voter suppression fear, as witnessed during the 2019 general election in parts of Lagos State that are predominantly dominated by the Igbos.

Meanwhile, 2023 is a different ball game with Atiku Abubakar and Rabiu Kwankwaso commanding encouraging Northern votes which any attempt to include violence against Peter Obi, or Atiku Abubakar Supporters may backfire.