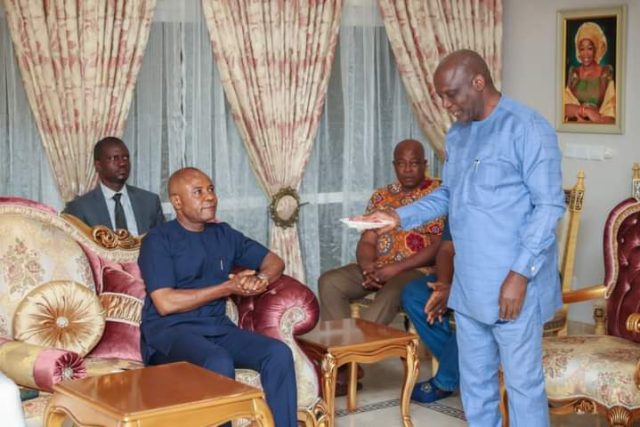 Professor Barth Nnaji’s disposition and conviction to honour the memorandum of understanding signed by the all gubernatorial aspirants under the umbrella of PDP by staying put to deliver Barr. Peter Mbah in the forthcoming general election is typical of his nature, worth of emulation and sacrosanct with the progressive developmental philosophy he represents since he ventured into murky Nigerian politics.

Although, it is not just Prof. Barth, there are others who signed the memorandum of understanding and yet, stayed put to help PDP and its gubernatorial candidate win the election. In the memory lane, we could see how significant their sacrifices and is deemed very acceptable before men and God.

At the very height of human struggle for power, there could only be one David, so those who signed to stay put and work together understand the inner powers of team efforts even as they may be had forgone to be on the driving seat but trusting that their resolution is the best effort to move humanity higher.

But Prof. Barth is extra-ordinary, by virtue of his towering profile having served Nigerian state as a Minister on two occasions, American educated and reached the academic pinnacle of being appointed a Professor in United States with academic and professional interests in Science, Technology and Energy technology.

Many could bet that Barth’s ambition for Enugu gubernatorial was like a home coming to him where he wanted to implement his roadmap for development. He came with huge value unlike some other guys, yet, he submerged for Barr. Peter Mbah to become governor of Enugu state. What a parable of a good brother?. He came with love, understanding and even professed that the nigh Barr. Peter Mbah won the party ticket was his best as he slept with his two eyes closed with resounding sweet dreams.

Prof. Barth’s engagement in Enugu gubernatorial primary is a testimony of placing character before politics and it is only in such a framework of good politics that greater number of the population would be interested to participate knowing that democracy is for everybody.

However and very unfortunate, there are others who signed the PDP memorandum of understanding for the same Enugu gubernatorial primary, yet, became very cantankerous and politically dangerous immediately it became obvious they were not going to win the nomination and they left the party Irrespective of the agreement they signed to support who ever becomes the anointed David going by the victory in the primary. Some of them taught that they had the best of godfathers to mull the ticket on their side; therefore, signing such a memorandum of understanding would add to their favour and gage others.

However, when the stars moved the crown to locate the head of our Barr.Peter Mbah, the calculus changed, they felt outsmarted but they were the ones who outsmarted their interests. The delegates who are the heartbeat of PDP have spoken and the choice was obvious and simply put: Peter Mbah!. They left the party thinking that they would gather greater momentum to suppress PDP and at best to perch on a selling brand to cross the political mountain but Enugu electorates are becoming more intelligent day by day and at appointed day and hour would distinguish the boundaries between reality and camouflage.

For instance, Mr. Peter Obi is a selling brand in the forthcoming presidential election but his soaring values came from his integrity and experiences in administrations and not from labour party, instead, Peter Obi’s candidacy added huge value to labou pary. Chief Edeoga left PDP after Barr. Peter Mbah’s victory in the primary election there by violating the spirit of the memorandum of understanding he earlier penned down his signature to stay and support whomever that emerges from the primary election.

Even as Chief Edeoga would struggle tirelessly to perch on Peter Obi’s brand for victory, However, Enugu electorates have the intellectual capacity to separate the chaff from the wheat at such an appointed time. What chief Edeoga, perhaps, may have not known was that the labour party ticket for gubernatorial election in Enugu was earlier offered to Prof. Barth Nnaji, but Prof. being resoundingly stable in thinking, declined! But the theory of nature abhors no vacuum may have played out here as the rejected foods end up in scavengers’ domain.

One may not need to ask what value is chief Edeoga bringing to labou party if not to perch on a selling brand and navigate how it could affect the internal dynamics in Enugu politics.
If Chief Edeoga had such a capacity to think deep, he would know that PDP offered him the platforms and associated opportunities to rise higher and such demands reciprocity.

Turning back and raising an opposition against those pillars that one used to climb higher is a bad omen. Records and data cannot lie, but humans have capacity to lie. He could have reasoned there would always be another opportunity for politics.

Chief Edeoga and others who left PDP to wedge opposition made the parable of a good brother inherent in Prof. Barth Nnaji an enduring legacy of all time. Prof. Barth encompasses big spirit and this election was an opportunity to see that side of Barth as he stayed put to sustain his brother’s nomination and help to cross him over to victory.

.Therefore, the victory is to be a shared one among three groups, namely, Barr. Peter Mbah, Prof. Barth and all those who signed the memorandum and stayed put to deliver their nominee and finally, the masses that yearn for a stronger democracy.

But the greatest goodwill Barr. Peter Mbah could do for the people of this state is to inculcate Prof. Barth’s roadmap for development into his sustainable program. Unequivocally, the youths look up to Prof. Barth for exemplary leadership.