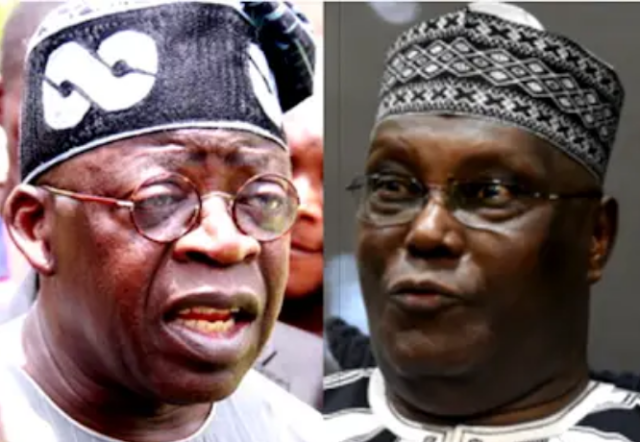 The Federal High Court sitting in Abuja, on Friday, slated October 6 to hear a suit seeking to disqualify the presidential candidate of the All Progressive Congress, APC, Bola Tinubu, for allegedly acting in breach of the Electoral Act.

The suit marked FHC/ABJ/CS/942/2022, which the immediate past Minister of State for Education, Chukwuemeka Nwajiuba filed alongside a non-governmental organization under the aegis of the Incorporated Trustees of Rights for All International, is equally praying the court to disqualify the candidate of the opposition Peoples Democratic Party, PDP, Atiku Abubakar, over the same allegation.

Justice Inyang Ekwo ordered service of all the relevant court processes as well as hearing notices on all the Defendants in the matter.

Other Defendants in the matter are; the APC, PDP, the Attorney-General of the Federation and the Independent National Electoral Commission, INEC.

It will be recalled that Nwajiuba, who is a chieftain of the APC and one of its presidential aspirants, had secured leave of the court to sue both his party’s presidential flag-bearer, Tinubu, and that of the PDP, Atiku.

Specifically, the Plaintiffs, in the suit they filed through their lawyer, Mr. Okere Nnamdi, alleged that the primary election that produced Tinubu as the 2023 presidential candidate of the APC, was marred by corruption and massive vote buying, insisting that majority of the delegates were bought over with dollars.

To strengthen his allegation, the ex-Minister who polled only one vote at the primary election that was held on June 8, included in his proof of evidence, a video recording showing the immediate past Minister of Transportation, Rotimi Amaechi, decrying that delegates at the APC primary sold their votes.

Besides, the Plaintiffs queried Tinubu’s source of income and his educational qualifications.

They urged the court to declare that the 3rd defendant (Tinubu), “who had previously sworn an affidavit in the INEC nomination form declaring that he lost his primary and secondary school documents and benefitted therefrom, cannot in a later affidavit deny and abandon same facts deposed in the previous affidavit and thus falsely contradicting his academic qualifications”.

The Plaintiffs attached to the suit, copies of affidavits Tinubu deposed to while he was the governorship candidate of the Alliance for Democracy, AD, in Lagos state.

“That the entire circumstances surrounding the two depositions of the 3rd defendant points to the fact that they are false and misleading and cannot be relied upon.

“That the possession of a higher education qualification such as a first degree or master’s degree is predicated on the minimum educational qualification as provided in the Constitution”, plaintiffs averred.

Among other things, the plaintiffs prayed the court to determine; “Whether the All Progressives Congress is exempted from compliance with section 90(3) of the Electoral Act 2022, having presented the 3rd defendant (Tinubu) as its presidential candidate to the 6th defendant (INEC) and the 6th defendant accepted and published same, being the name of a person whose source of N100m contribution fee for the nomination form and expression of interest form was not verified.

The plaintiffs equally urged the court to also disqualify Atiku who was cited as the 4th Defendant in the suit, for also engaging in vote buying.