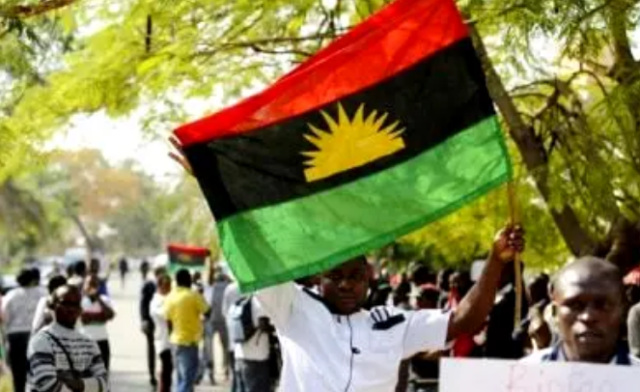 THE Indigenous People of Biafra, IPOB, yesterday, replied the Inspector General of Police, IGP, over his alleged claim that the pro-Biafra group wants to attack political campaigners, saying that the police, rather, are  plotting to attack campaigners opposed to his appointing authority.

IPoB alleged that the IGP, as has been ordered by his appointing authority, is planning to use his men to attack political campaigners for the popular candidates that are giving his benefactors nightmares, due to their popularity.

In a statement by IPOB’s image maker, Emma Powerful  told the Nigerian Police boss and his men to focus on things that matter to the people and leave IPOB out in their partial and disgraceful activities of not being able to protect Nigerians.

IPOB’S statement read, “We the global family and movement of the Indigenous People of Biafra, IPOB, under the command and leadership of Mazi Nnamdi Okwuchukwu Kanu, is amused by the laughable and disgraceful statement credited to the Nigerian Inspector General of Police, IGP, linking Eastern Security Network, ESN and IPoB to their already planned attacks on political campaigners for Nigerian fraudulent election. “The corrupt government of Nigeria and their compromised security should know that IPoB and ESN volunteers don’t engage with Nigeria’s shambolic political campaigns and selection process they call election. IG of Police should, therefore, leave IPoB volunteers and ESN operatives alone to focus on things that matter instead of trying to get them involved in Nigeria’s government and its fraudulent political processes.

“Nigerian Police have concluded their plans to attack political campaigners that are against the candidate of their appointees’ political party. They have planned to commit many crimes during political campaigns because the candidate of  the IGP” appointee party has lost the election from the day he  emerged and their IGP appointing authority has told him what to do against their opponents and they have concluded the evil plan to carry out the attack and tag it on IPOB and ESN but they will fail as usual.

“We have always maintained that we are not interested in anything that has to do with Nigeria let alone taking any side in their fraudulent political process, and crooked election, where the winners never emerge victorious, but the losers. IPoB members are not Zoo politicians. The only political process that IPoB will participate in is an UN-supervised Biafra Referendum that will usher in Biafra sovereignty and Independence.

“Anyone intending to link ESN operatives, volunteers, including IPoB members in their planned political attacks is deluded and regret will always be their portion. The Inspector General of Police and his criminal officers should stop their planned attacks because they will always be exposed and disgraced. IPoB hands are clean.

“In their attempt and process of blackmailing IPoB,they will plunge Nigeria into a political crisis that will consume the already half-dead country called Nigeria and their corrupt politicians, who never see anything wrong in what the present administration is doing in Nigeria.

“If the government wants IPoB to be part of their politics, they should fix a date for the Biafra referendum, then they will see the civilized political prowess of IPoB. Desperately linking IPoB with their fraudulent election shows that the government has lost focus and confidence in its candidate whose popularity is waning on daily basis.

“IPOB has remained peaceful and non-violent in its quest of seeking Biafra freedom from Nigeria State, and no amount of blackmail can change our resolve to restore Biafra from the shackles of Nigeria’s pitiable, confused, and clueless government.

“Nigeria government should leave IPoB/ESN alone. We are bigger than the political strategies the Nigerian government and the  Nigerian Police are applying.”

“We know that Fulani IG and him Fulani appointee have perfected plans to kill people for politics and link it to IPoB for their usual blackmail. We also know they have mobilized some compromised media houses to help them spread their lies against IPoB and ESN. We are already used to their blackmail and are waiting to expose their lies they are not good liars because each one they tell is found to have many exposing and disgraceful characters known to Nigerian Police.

“The whole world knows that IPOoB is not interested in the selection process they call an election in Nigeria because it doesn’t meet our standards to achieve Biafra freedom. IPoB will achieve Biafra freedom, not through Nigeria politics or election, but an UN-supervised referendum or an outright declaration of BIAFRA.”