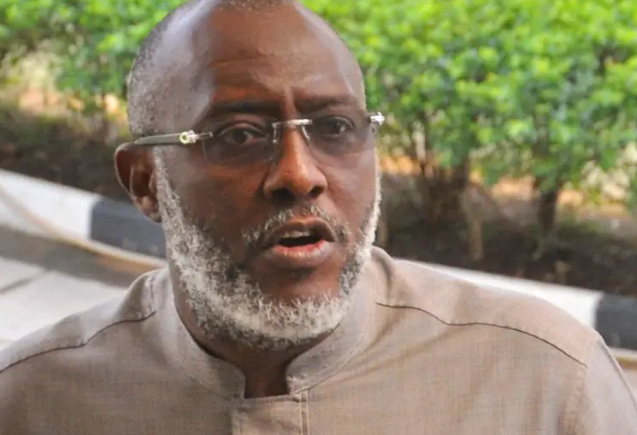 Chief Olisa Metuh has about the richest depository of the institutional character and flares of the Peoples Democratic Party, PDP. He was ex-officio member of the National Executive Committee, NEC, National Auditor, National Vice-Chairman, Southeast and most recently, National Publicity Secretary of the party.

He bears in his body the marks of his stewardship and fidelity to the party as memorably etched by his recent trials over administrative issues in the party.

Metuh had until now watched from the sidelines as fellow party grandees as Prof Jerry Gana, Chief Bode George among others entered the fray in the contentions between the Nyesom Wike tendency and the party leadership over the outcome of the 2022 National Convention of the party.

Arising from his quietude, Metuh in this interview gives a historical perspective of the issues in dispute with a caution to party elders not to misadvise Governor Wike.

What is your perspective on the issues in the PDP?

I speak from institutional knowledge as the longest serving member of the party’s NEC, I don’t think it is fair to say that the South has been shortchanged in the affairs of the party.

If you put it the other way, I think that the South has gotten more than a fair share in the affairs of the PDP and we are comfortable with that and we don’t have any problem.

I admire the courage, the doggedness of Bode George who has been our leader for a while and I think he should tone it down. If I recall in history, I remember that he was very consistent in trying to remove Atiku from the National Executive Committee, of the PDP in 2005. But these things are in the past and should not be personal as we are talking about the progress of the party now.

Perception of the role of Bode George in the Wike Camp

In 2006 towards the end of Obasanjo’s term he led the Southern conference and made a powerful statement that a Southern president should continue after Obasanjo. So, he is being consistent, he champions the affairs of the South.

But let’s remain on what is correct. It is not correct, it is not proper that in an election year that you would be insisting on who will be the chairman of the party to a candidate, you can only do that when you believe or when you are working towards the failure of that candidate.

If you are actually working for Atiku to win the presidency you cannot be insisting on a chairman because the president when he is elected can always change a chairman whether he is acting or elected, he has enough influence to change him. But if you are actively working for him to fail, you are wishing him not to win or you don’t believe that he will win, then we can understand why you are fighting for the issue.

On the principle of zoning in PDP?

What we are talking about is that when a president wins an election that there will be zoning and things will be well discussed. PDP believes in the principle of zoning. The president will come from a different zone from the vice-president and secretary to the Government, the chairman of the party, the Senate President and the Speaker of the House. That is the principle of zoning that is entrenched in our party.

So, there is no need to talk about it until after we have won election, let us come together and fight and insist on PDP winning the election. If we do not want Atiku to win the election then we understand, let us bring down the house.

How to remove the chairman

The national chairman said that if a Northern candidate emerges and if the party asks him to resign, that he will resign.

Now supposing the candidate of the party buckles to pressure to give directive against some people running in the election aligned to those who say they are withdrawing from his campaign council and ask his people to withdraw from their own campaigns? Won’t it be chaos?

People will come to him, let us fight these men he will say no. It is obvious that Nigeria needs such a father figure, a tolerant person. In the midst of insults, in the midst of provocations, indeed undue provocations because things that can be discussed inside the house are being thrown about and being marketed.

I believe that it is only when you want to distract somebody that you go about making press statements in the media and in the newspapers. If you want to advise him, come into the house and advise them.

When they called the National Executive Committee meeting you people were not there. How do you mean well when you do not discuss inhouse but always go on TV? The cardinal principle in our party is that we do not discuss internal disagreements in public. And who knows this better than Chief Bode George who has been a deputy national chairman?

So, what is the motive of the Wike Group?

The question is what is the motive? What are the intents of these group of people? That is the question.

The motive cannot be to defend the South. I am a southerner. Are you defending the South when the South has gotten more than its share in the affairs of the PDP in the last 20 years.

We have only had two persons run for the presidency from the North: Yar‘Adua who spent two years and Atiku Abubakar who ran four years ago and lost.

What would happen if Atiku yields to Wike?

He will lose a lot of support in the North. He will be seen as a weak leader. He will be seen as someone as anyone can push around. And this is the most important thing and which is that Atiku is running an election to be the commander-in-chief of the Nigerian Armed Forces, to face insurgents, to face the threats against the country, to deal with separatists and bandits and terrorists.

Now if he is a candidate and starts succumbing to the whims, to the threats and to the pressure on an individual or a group, then you are portraying him as a weak man that cannot control the affairs of the country.

If you really want him to see your reason then you will discuss with him in house but when you issue threats to him and he buckles and succumbs, then he cannot be the commander in chief of the Nigerian Armed Forces, then he will be a weak president. Then you are portraying him as somebody who is not strong enough and I don’t think that that is in the interest of the party.

Or from even external forces, other countries that would want to threaten us or even with trade disputes. When we have trade disputes with China, when we meet all these issues, what will the president do? He will buckle if he can buckle to people who are using the media to press issues that they can press in private.