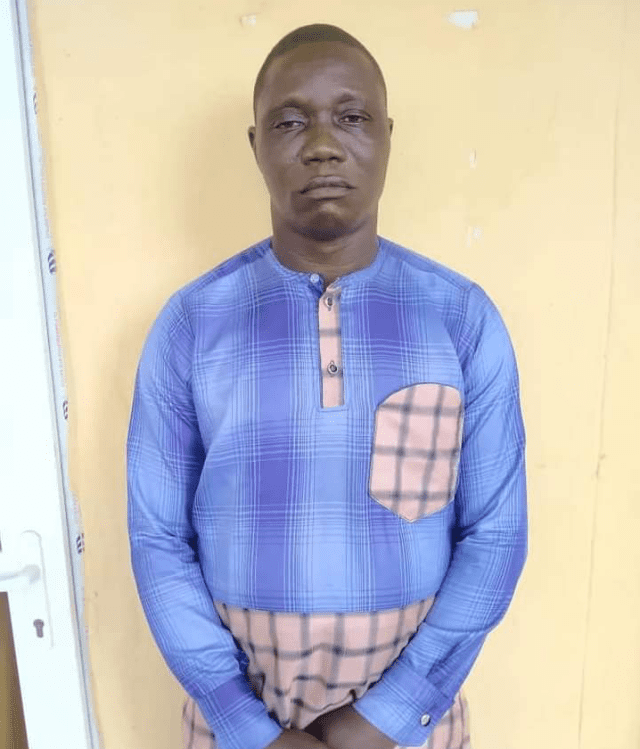 A 48-year-old pastor, Michael Abiodun Rabiu, who was arrested in Ogun state for d€filing and impregnating 12-year-old daughter of church member, has said that he slept with the minor to exorcise the spirit of d€ath plaguing her family.

The Pastor, who is a father of three, was arrested following information received at Owode Egba divisional headquarters.

The victim’s mother joined the church as a result of a spiritual problem that led to the death of two of her daughters.

In order to prevent the victim from the same calamity, the mother took the girl to the suspect’s church for spiritual deliverance.

Spokesperson of the State Police Command, SP Abimbola Oyeyemi, who confirmed the arrest, had said the minor who was delivered of a baby three months ago informed the police that she was threatened by the Pastor with a dare consequence if she informed anybody about what had happened between them.

On interrogation, Pastor Michael, who confessed to the crime, blamed it on the devil, admitting that the girl had known no man before he had a s€xual relationship with the JSS 2 student.

““I’m from Ikorodu, Lagos State, but I have been in Owode Egba, Ogun State, for 13 years. I’m married and have three children – two by my first wife and one by my new wife. I am a deliverance pastor and the founder of the church I am in charge of. I started the deliverance ministry about 13 years ago but had been in the calling about 25 years ago,” he said.

“In the girl’s lineage, there is a god call ‘tánràn’. It is a snake god. The god had already taken some children born before her, so that was what brought her and her mother to me for deliverance

“When she was brought to me, I advised her mother to quickly take care of her spiritually so that she would not lose her too.”