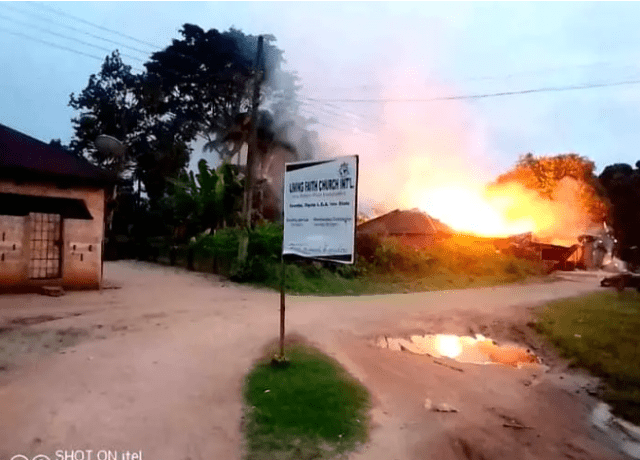 Gunmen on Thursday set ablaze houses, shops in some parts of Izombe in the Ogutal local government area of Imo state.

An eyewitness who spoke to Vanguard from the area said the incident started happening from 4:30 pm till 7:30 pm in Izombe.

At the time of filing this story, the reason for the attacks was not made known.

Some of the locations where the attacks took place were mentioned to Vanguard by an eyewitness they include; Central market, Amamuruegede, Eziama, Umuakpa, and Eke-well among others.

But a source who did not want his name mentioned in the report for security reasons, said: “We saw men in a security uniform. They came in with about eight security vehicles fully armed. They drove in at about 4:30 pm.

“When we saw them people were afraid. As it was getting dark, all of a sudden they shot in the air and people started running. They went straight to some selected houses and shops and put fa ire on the buildings. They burnt more than ten houses.”

He continued: “As I am talking to you now, many people have abandoned their houses and fled into the bushes. Some of us don’t know the whereabouts of our children and wives. By tomorrow, we will come out and know the level of damage they have done. Till now, we don’t know the sins we have committed that we deserve this kind of attack.”

At the time of filing this report, the Imo state Police Public Relations Officer, Micheal Abattam, was yet to respond.