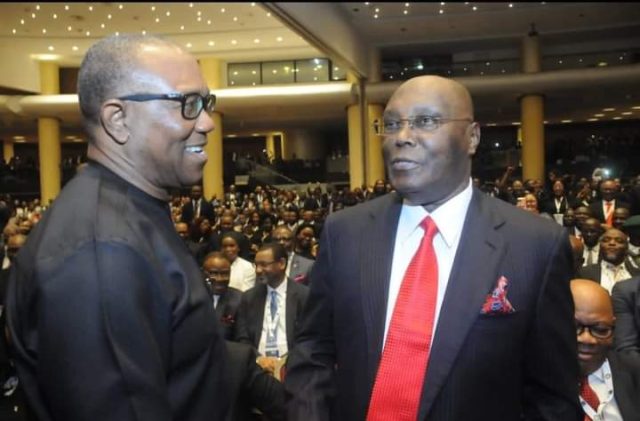 Although Tinubu was represented by his running mate, Kashim Shettima, Atiku Abubakar, Obi and the other presidential candidates were physically present.

Speaking at the conference, Atiku said he would hand over Federal Government-owned universities to state governments.

Atiku, who stated this as a panelist at the opening ceremony of the  conference, with the theme ‘’Bold Transitions’’, said  the government doesn’t have infinite resources to continue to shoulder the cost of university education in the country, especially against the backdrop of ongoing strike of the Academic Staff Union of Universities, ASUU, which had been on for over six months.

“The only way is to make sure that you make conducive environment available to both foreign and local investors to participate in our country, whether it is infrastructure, education or power.

“I had an argument with a university professor from the Federal University, Lokoja. He said he read in my policy document that I intended to devolve, in other words, to return education to the states. How dare do I do that?

“I said the children you send to America, to England, who own those universities? Mostly the private sector. So, why is it that you think we cannot do it here? We don’t have the money.”

He also said one of his major goals in vying for the 2023 general election was to unite Nigerians to fight insecurity.

Atiku, who noted that Nigerians had never been this divided in her history, uniting Nigerians remains one of his five-fold plans for the country.

He said: “Since the return of democracy, Nigeria has never been in such a critical situation as we find ourselves now. The problem of poverty, insecurity, unemployment, etc is enormous but what is important is how to tackle them.

“When PDP came into power in 1999, despite winning overwhelmingly across the country, we decided to include members of other party in our leadership. That singular action united the country and resulted in calm. I believe we can have that experience again. It is only when we have a sense of belonging that we can deal with insecurity.”

Atiku also said he would abolish the multiple exchange rate and devolve more powers to the states if elected president.

On his part, Shettima, who represented  Bola Tinubu at the conference, said his principal  will replicate the wonders in Lagos and Borno states, if elected president.

The former governor of Borno State disclosed that he built some of the best schools in the state during his tenure, adding that Tinubu’s administration will address issues of the economy and security, among others.

He said:  “Nigerians have the capability to see through the worn-out rhetoric and sophistry of pretentious politicians. Nigerians should follow the man that knows the road. From day one, we will hit the ground running. We’ll promptly address the issue of the economy, ecology, and security.

“We have the antecedents. I built some of the best schools in Nigeria. Go to Borno and see wonders; you will never believe that it is a state in a state of war.

“So, we are going to replicate our achievements in Lagos, in Borno and some of the frontline states so that our nation will be a better place. The fundamental issue is pure leadership.”

2023 election not about religion, tribe but character, competence — Obi

In his presentation, , Mr Peter Obi said the 2023 election will not be about religion or tribe but character and competence in leadership.

He said:  “Nigeria is in a mess. We got here simply because of the cumulative effect of bad leadership. The coming election is not about tribe or religion but about character and competence. We need a bold transition from a highly insecure state to a highly secure state.”

Obi also stated that his approach to tackle the worsening exchange rate problem in the country will be to encourage manufacturing and export of goods and services.

In her keynote address, titled, ‘Bold Transition’, Ms. Adichie noted that Nigeria is currently in disarray and in dire need of heroes to give her purposeful leadership.

She stated that the rising insecurity in the country is a fundamental problem of the failure of the rule of law.

Adichie, who also noted that NBA has a great role to play in the success of the forthcoming general elections in the country, said:

“We are counting on the NBA to act as our collective social conscience in the forthcoming election in 2023.

“Nigeria is in disarray. Things are hard and getting harder by the day. We can’t be safe when there is no rule of law. Nigerians are starved of heroes to look up to.  “Late Dora Akunyili and Gani Gawehimmi were heroes that Nigerians looked up to before now. Unfortunately, that era has gone. I believe that NBA is in a position to give the nation heroes that we can look up to lead the nation.

“As long as we refuse to untangle the knot of injustice, peace cannot thrive. If we don’t talk about it, we fail to hold leaders accountable and we turn what should be transparent systems into ugly, opaque cults.

“My experience made me think there’s something dead in us, in our society; a death of self-awareness and ability for self-criticism.

Adichie  advocated  an uncorrupted judicial system and called on the NBA to leverage technology in the judicial process and the administration of justice in the country. “Nigerians are disillusioned because they know of the decline of professionalism in some sections of the legal profession. As the NBA continues to fight the abuse of power, it must also look inward not to be corrupted.”

The 62nd annual general conference of the Nigerian Bar Association, has officially kicked off in Lagos with an opening ceremony, which is ongoing.

The theme is “Bold Transitions”.

Also present are The chief judge of Lagos state, Justice Kazeem Alogba, who is also representing the Chief Justice of Nigeria, Justice Olukayode Ariwoola, and the Attorney-General of Lagos, Moyosore Onigbanjo (SAN) who is representing Governor Babajide Sanwo-Olu.