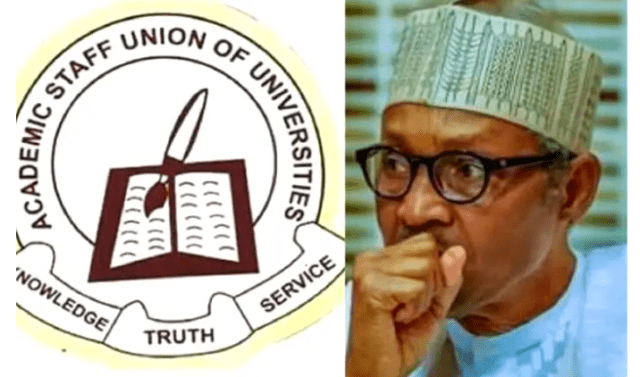 Indications emerged yesterday that the Federal Government may consider the option of proscribing the Academic Staff Union of Universities, ASUU if it fails to call off the prolonged strike after an offer was made to it.

The Federal Government has also approved an additional N100 billion for the university sector as part of the understanding in the re-negotiation of the 2009 Agreement.

Besides, N50 billion was equally approved to be shared by the university-based unions as earned allowances.

The four university-based unions that have been agitating for the payment of earned allowances are ASUU, which calls its own Earned Academic Allowances, the Senior Staff Association of Nigerian Universities, SSANU, the Non-Academic Union of Education and Associated Institutions, NASU, and the National Association of Academic Technologists, NAAT.

Recall that ASUU embarked on a month warning strike on February 14, 2022 and has been rolling over the strike till date, while the other three unions, starting with NAAT, downed tools in March.

Among the contentious issues are the non-release of revitalization funds, earned allowances, problems associated with payment of salaries through the use of Integrated Payroll and Personnel Information System, IPPIS and the re-negotiation of the 2009 Agreement.

All the the three platforms have been submitted to the government through the National Information Technology Development Agency, NITDA, which has subjected them to integrity tests.

While SSANU and NASU through their umbrella, Joint Action Committee, JAC, on Saturday signed agreement to suspend the strike on Wednesday for two months, ASUU has remained adamant, insisting that the government should pay its members the withheld five months salary before it would suspend the six months strike.

The Federal Government had invoked the ‘no work, no pay’ policy for the striking public university workers and the Minister of Education, Mallam Adamu Adamu on Thursday told journalists that there is no going back on its total implementation.

Banning ASUU on the cards

Multiple sources in the Presidency and the Ministry of Education told Vanguard that if ASUU refused to reciprocate the Federal Government’s gesture by calling off the strike, the government would consider the option of prescribing the union.

One of the sources who spoke on condition of anonymity, said:  “Because of the priority President  Muhammadu Buhari has paid to education, he has approved additional N100 billion for the universities and about N57 billion for the Polytechnics and Colleges of Education.

“It will be unpatrotic on the side of ASUU not to reciprocate the government gesture and call off the strike for our children to go back to school. The government is not also unmindful of the cooperation of SSANU and NASU for being patriotic.

“It is part of the labour laws that the unions, especially ASUU, should apply cessation of strike once a trade dispute is apprehended and conciliation is ongoing.

“Why should ASUU say that the Federal Government has done nothing? You should also recall that the President co-opted his Chief of Staff, Professor Ibrahim Gambari, and the Secretary to the government of the Federation, Mr. Boss Mustapha, to join in the negotiation to end the strike. Why is ASUU recalcitrant and daring everybody?”

Expressing disappointment that ASUU had allegedly not appreciated the government efforts, the sources said the federal government had many options before it, which include prescribing the union.

“The government has so many options if ASUU refuses to be patriotic. One of the options is the proscription of ASUU which is contained in the Trade Unions Act and even in the Trade Disputes Act.

“The President can proscribe an association whose action is inimical and constitute economic sabotage to a country.  In the Trade Unions Act, the President can withdraw the certificate of any organization whose conduct is not in tandem with the terms for their registration.

“Also, Section 17 of the Trade Dispute Act permits the Minister of Labour to approach the National Industrial Court. CAP 78, laws of the Federal Republic of Nigeria 2004, to refer the matter to the National Industrial Court for adjudication to enforce the legality or otherwise of the ongoing prolonged strike by ASUU and to interpret in entirety the provision of Section 18 of the Trade Dispute Act as it applies to cessation of strike once a trade dispute is apprehended by the Minister of Labour and Employment and conciliation is ongoing.”

Attempts made to confirm the option of prescribing ASUU or dragging it to National Industrial Court if it fails to suspend the strike after the alleged government offer from the Minister of Labour and Employment, Senator Chris Ngige, was unsuccessful at press time yesterday.

Recall that the Joint Action Committee, JAC, of the Non-Academic Staff Union of NASU, and SSANU, had on Saturday, announced the suspension of strike effective from Wednesday, August 24, 2022, for initial two months.

The suspension of the strike, according to a statement issued by the JAC’s spokesman, Prince Peters Adeyemi, followed the conclusion of negotiation between the two unions and the Federal Government team, led by the Minister of Education, Mallam Adamu Adamu.

The statement explained that the two months was to allow government implement the agreements reached.

“Part of the agreement is the decision of the government to set aside the sum of N50 billion for the payment of earned academic and earned allowances, cogent decision on the University Peculiar Personnel Payroll System (U3PS), release of the white paper on university visitation panel and funding of the universities.

“On the poor funding of federal institutions, the Minister said he directed the National Universities Commission, NUC, to ensure that all the schools are up-to-date on what they are supposed to do, otherwise sanctions will be visited on any institution that defaults.

“The Minister of Education also gave an assurance that no member of the unions that participated in the strike will be victimised.

“The Minister said President Muhammadu Buhari is committed to devote 15 per cent of the national budget to education.

“On the salary payment system, the Minister said the alternative payment systems provided by ASUU JAC of NASU and SSANU did very well. He added that the Federal Government is awaiting the report of the technical committee it set up before taking action on the matter.”

The JAC spokesman further said:  “After a very prolonged negotiations and dialogue between the two unions and the Federal Government, led by the Minister of Education and after the meeting, the two unions decided to suspend the strike for the initial period of two months.

“When we presented the offers that the government made to our members, they think that since the majority of the issues that are in contention have been substantially addressed by the government, the strike should be suspended, effective this Wednesday, August 24, 2022.”

Similarly, SSANU in a statement signed by its President, Comrade Mohammed Ibrahim, said:  “Nigerians would recall that the Joint Action Committee of NASU and SSANU embarked on a National Industrial Action on March 27, 2022.

“The National Industrial Action was for an initial two week period, but owing to the nature of response which we considered almost non-existent, had to be renewed for another two weeks, leading to another one month and subsequently three months to allow concrete decisions to be taken on our demands.

“The purpose of the strike which entered it’s 146 days today was to drive home our demands.

“In the course of the industrial action, we had engaged with various organs of government, including the Presidency, represented by the Chief of Staff to the President.

“We had also had meetings with the Minister of Labour and Employment, Minister of Education and heads of various governmental agencies in order to ensure a speedy resolution of the impasse.

“This strike would have been avoidable if both parties, the government and the union(s) had kept to their parts of the bargain. Unfortunately, the bane of industrial harmony in the university system has been the issue of not honouring agreements freely entered into.