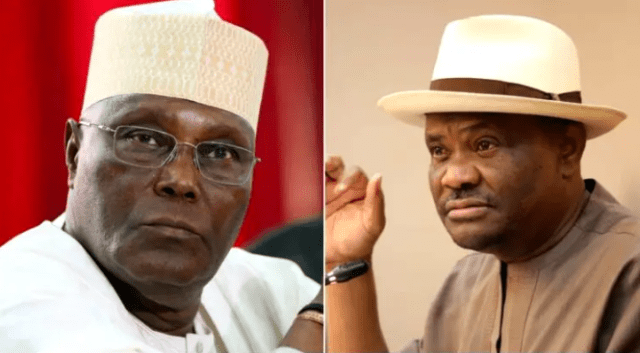 FOLLOWING the perceived stalemate that characterised the reconciliation committee set up to end the frosty relationship between the presidential candidate of Peoples Democratic Party, PDP, Alhaji Atiku Abubakar, and Governor Nyesom Wike of Rivers State, indications emerged, yesterday, that the party’s candidate may call the bluff of the governor and announce members of the Presidential Council Committee.

This came on a day some loyalists of the Rivers governor were said to have started abandoning him.

But firing back, allies of Governor Wike, yesterday, dismissed speculations of a major crack within their ranks.

The two camps met in Port-Harcourt over the weekend for their inaugural meeting.

But a source familiar with the frosty relationship between the two PDP leaders disclosed that the two camps have failed to shift grounds, a situation that may affect the reconciliation.

The source said: “The reconciliation meeting between Atiku and Wike remains a stalemate. From our findings, the Atiku camp will ignore Wike and go ahead to announce the Presidential Campaign Committee.

On where the governors stand, the source said: “The PDP governors will hold their meetings but they are divided. Some are with Atiku, while others are with Wike. It means they are not united. The problem we have is that there is no neutral person that can resolve the feud between Atiku and Wike.”

Another source told Vanguard that former President Goodluck Jonathan has refused to intervene in the frosty relationship.

The source said: “The former President cannot do anything because he has ignored all that is happening in the PDP. He (Jonathan) does not like the Atiku camp and so, he enjoys what Wike is doing to him (Atiku). He (Jonathan) is from the South and he supports that power must shift to the South.”

Another source told Vanguard that most of the politicians, especially those from Rivers State are tired of Wike’s “bravado.”

Meanwhile, another source told Vanguard that some of his former allies have fallen out with the Rivers governor for being oppressed.

The source said: “What I know is that most of Wike’s allies are distancing themselves from him, especially PDP politicians from Rivers, are not aligning themselves with his actions.

”That is the level he is now. All his latest actions are just bravado. How he is going to sustain it, I do not know for now.”

Some of Wike’s former allies, allegedly led by former Deputy Speaker of House of Representatives, Mr Austin Opara, including Sen Lee Maeba and former Governor Celestine Omehia are said to have dumped him.

Why Wike is after us – MAEBA

On the show of supremacy over Rivers PDP and the offensive against them, Lee Maeba said: “The governor was talking as if he is a superhuman. When you apportion so much right to yourself, then you are superhuman. Austin Opara was Deputy Speaker of the House of Representatives when Atiku Abubakar was the Vice President.

“They attended caucus meeting together and National Economic Council Meeting. So, does it mean that Austin Opara, who has been friends with Atiku for over 20 years ago, will now start to beg Wike to go and see Atiku?

“I met Atiku first in 1992 in Jos for the Social Democratic Party, SDP, campaigns. We started working together in 2003 when I became senator. That time where was he (Wike)? When Austin Opara was working with Atiku, holding meetings, Wike was struggling to come into limelight.”

What uplifted him politically he’s about to be consumed -SOURCE

Reacting to the development, a top Rivers PDP source told Vanguard that: “There is nothing new in what is happening. That has always been his style. He deploys carrot and stick to enforce loyalty and rewards those who are loyal to him.

“Once that fails, he goes punitive, going any length to hound down a rebel. But in this instance, he is beginning to bite more than he can chew. He wants to create enemies in his home. The politics of bullying and extreme intimidation that has sprung him to power and fortune is about to consume him.”

But firing back allies of the Rivers State Governor have dismissed speculations of a major crack within their ranks.

A top-ranking party source, who pleaded anonymity, said: “In the interest of peace, there are a lot of issues at stake, especially for those of contesting for one thing or another next year.

“His collective demands are simple, we must have guarantees that whatever agreement we arrive at the end of our meeting with the Atiku group will be respected.

“We want it in writing because it is obvious that gentleman’s agreement no longer works with some people- they conveniently forget when it suits them.”

Another source said: “We are intact. Like I have said before, Wike is not fighting for himself, his fight is in the interest of the party and for those of us who are standing with him, he is not interested in being Minister, he has been Minister before becoming governor, he is not contesting for a third term, he wants the PDP to have a proper reward system in place to avoid rancour in the future.”

Crisis to be over soon— Atiku camp

The Atiku camp is, however, optimistic that the crisis will soon be brought to an end.

A source within the Atiku camp said: “There is light at the end of this tunnel, the fact that we agreed to talk and we are talking is a good sign.

“You may not know this, even the ruling All Progressives Congress, APC, is waiting for us. Why do you think they have been unable to unveil their campaign council?“