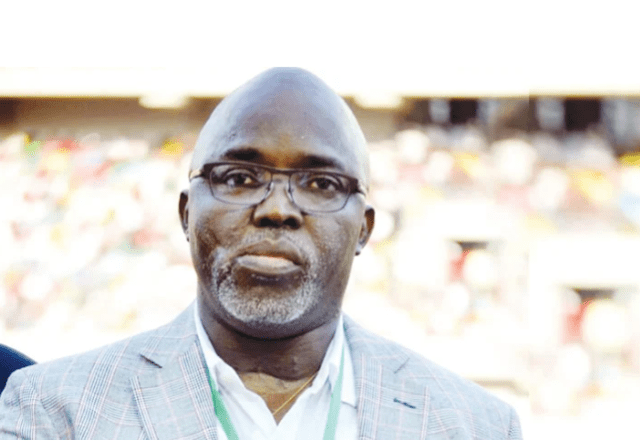 President of the Nigerian Football Federation, Pinnick Amaju, has revealed that the federation is still owing their vendors over N600m, Sunday PUNCH reports.

Pinnick made this known in an interview with Brila FM on Saturday.

The NFF have outstanding bills to pay to hotels, travel agents, various national teams, and staff members our correspondent learnt.

Pinnick whose eight-year tenure in office ends September 30 after the Annual General Assembly agreed to a 10-day extension also added that the NFF is also being owed $6m by one of its sponsors.

“We owe our hotels and traveling agencies over N600m, but I always want to guarantee the payment. So, it’s been very tough, but Nigerians don’t understand,” Pinnick said while highlighting his regrets as the President of the NFF in an interview with Brila FM on Saturday.

“Right now our sponsors are not paying on time because of the economic challenges. One of our sponsors is owing us about $6m and because of the business they do and the relationship, we have to understand. That money would have solved most of our problems.

“Some sponsors have even called us to renegotiate the terms in the contract, saying they can’t meet up and we understand.

“For example, our budget to the government annually is over N800m.”

Pinnick also disclosed that plans were in the offing to build a football centre for the national teams.

“I wanted to build a centre because we are spending so much renting hotels and others,” he continued

“We wanted to build a world-class centre with four training pitches, almost six floors of hotel with 100 rooms and gym and 1000 capacity stadium. We are almost at the end of discussing FIFA’s capacity development and our sponsors, so we can reduce cost.”

Meanwhile, having opted against contesting to remain in office despite calls from associates persuading him to continue in office, Pinnick believes there are competent replacements among the NFF executive board to take over from him.

“My first and second vice Presidents are competent, and I will not leave them,” he added.

“Even if the next President comes from outside the current executive committee, I’ll force myself to work with him, because we are all Nigerians.”