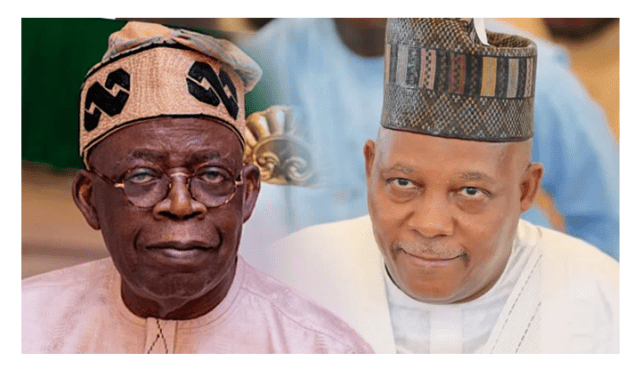 Protests against the Muslim-Muslim presidential ticket of the All Progressives Congress thickened on Friday with over 200 youths and supporters from the North-Central zone demanding a reversal of the decision.

They called on the presidential candidate of the APC, Asiwaju Bola Tinubu, to drop a former governor of Borno State, Kashim Shettima, as his running mate.

The demonstrators, under the aegis of the North Central Progressives Youths, began the protest at the Unity Fountain and it culminated at the Presidential Villa.

While chanting solidarity songs, the youth from the six North-Central states and the Federal Capital Territory held banners with inscriptions such as, ‘APC presidential ticket must be for all faith’, ‘Shettima must go now, all Christians say no to Islamisation of APC presidential ticket’, ‘Tinubu and Shettima must do the needful, it is our constitutional right’, and ‘Don’t destroy the unity of Nigeria’, among others.

The President of the NCPY, Musa Attah, who described Tinubu as a “man loved and adored by Nigerians,” added that his only obstacle to getting victory in the 2023 presidential election would be his running mate.

He called on the President, Major General Muhammadu Buhari (retd.), to prevail on Tinubu to replace Shettima with a Christian for the good of the party and Nigeria.

According to him, since the President has etched his name in history due to achievements in infrastructure, anti-corruption and good governance, Buhari must protect his legacies by working towards a worthy successor who can consolidate his gains.

Attah said, “Mr President, on numerous occasions you have promised to bequeath a democratic system imbued with workable institutional structures that will stand the test of time. True to your word, the nation’s electoral system has been revolutionised.

“Your footprints will never be forgotten in the area of infrastructure. The fact that there’s still a country called Nigeria is due to your resilience despite the mirage of security challenges. We are also coping with the global economic crisis. Meanwhile, the trial of the suspended Accountant-General of the Federation and many others has proven your zero tolerance for corruption. There are no sacred cows.”