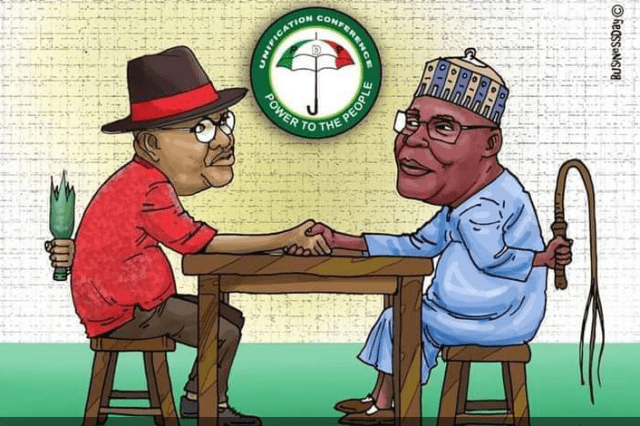 Former Minister of Information and leader of Nyesom Wike reconciliation camp, Professor Jerry Gana, has warned that if the crisis in the Peoples Democratic Party (PDP) is not resolved, Governor Nyesom Wike, himself and others will move out.

Speaking while commissioning a project in Port Harcourt, Rivers state, Gana called on Nigerians not to waste their votes for the ruling All Progressives Congress (APC), because they have failed Nigerians woefully.

“We want to assure you that the problems with the PDP, we shall resolve them and if it doesn’t resolve, this leader, the governor here, together with all of us, we shall tell the people of Nigeria where to go. They are not baby.

“Don’t make the mistake of wasting your vote to go to the other side. You know who I mean. They have failed woefully, embarrassingly failed, therefore don’t even go there,” he said.

Noting that the Nigeria’s military forces are more than enough to defeat the bandits terrorising the nation, the former Minister appealed to Mr. President and other leaders that the nation cannot continue to lose its security operatives.

Eulogizing governor Wike for what he has done, Prof. Gana said, “look at what this governor has done. You know what was happening in this state. The governor gave good and focused leadership and now you are in peace. We want to transfer this peace to the rest of Nigeria.

“It is possible and it must be done and therefore I like to assure the good people of Rivers State and Nigerians that they should continue to ensure they give that opportunity to the Peoples Democratic Party so that we can be at the center and give a government that care for the people because the security and welfare of the people is the primary purpose of government.

“If you cannot secure the people, you cannot provide peace and stability, then you are not a good government because governance is about people’s security, people’s welfare, people’s future, people’s everything that is really important to them.”

Lamenting the economy situation in the country, Gana said, “let me also appeal that the national economy of Nigeria is about to collapse. Unless something is really done very seriously, the Nigerian national economy is about to crumble. Inflation is at a very high level, prices rising every day, the common man is suffering. And the economy is not doing well at all and therefore we appeal to the managers of this economy.”

“We admire the new technology being deployed for elections. You should not allow any force, political, economic or otherwise to dissuade you from doing the right thing. Let the people of Nigeria have free, fair, peaceful and credible elections. Let the people elect their leaders.”