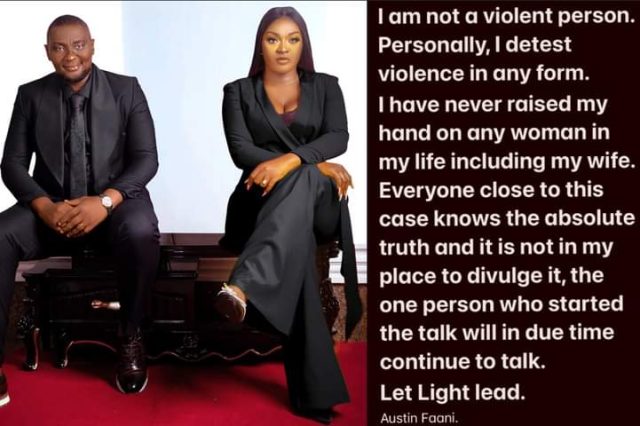 Austin Faani, husband of Nollywood actress, Chacha Eke-Faani, has denied raising his hands on his wife or any other woman.

Reacting to his wife’s post via Instagram on Tuesday, she stated that she did not want to “die or go inexplicably missing”.

Chacha announced the crash of her nine-year marriage, hinting at domestic violence.

However, Austin Faani has taken to his Instagram page on Tuesday to debunk the rumours. According to him, he had never raised his hands to harm any woman, including his wife.

“I am not a violent person. Personally, I detest violence in any form. I have never raised my hand on any woman in my life, including my wife.

“Everyone close to this case knows the absolute truth and it is not in my place to divulge it. The one person who started the talk will, in due time, continues to talk. Let light lead,” he wrote in the post.

This is not the first time the actress will announce the breakdown of her marriage. She earlier announced her split from Austin back in October 2020, which also at the time, caused many to believe that she was being physically abused in the marriage.