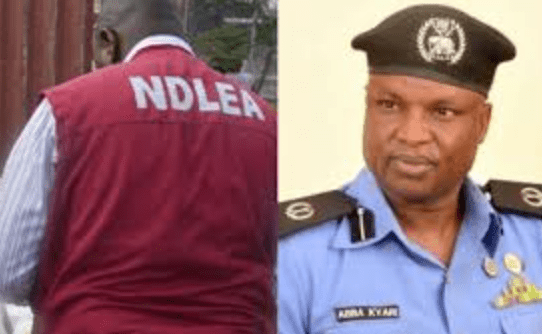 On Tuesday, two drug traffickers arrested in January 19 by the Police at the Akanu Ibiam International Airport Enugu were sentenced to 2 years imprisonment for each of the 3 counts which is to run concurrently by the Federal High Court sitting in Abuja.

The court handed down the sentence on Tuesday less than six months to their arrest by the police after they were cleared by the Nigerian Drug Law Enforcement Agency, NDLEA in Enugu Airport as confessed by the now convicted suspects.

Recall the NDLEA was accused of conniving with the two drug traffickers and others at large who usually used the Enugu Airport as a transit point to ship in heavy quantities of drugs from Brazil through Ethiopia to Nigeria.

Luck ran out of the two arrested drug traffickers – Chibunna Patrick Umeibe and Emeka Alphonsus Ezenwanne – as men of the Inspector General of Police Intelligence Response Team, IGP-IRT arrested them after they were cleared by men of the NDLEA.

Others escaped and have not been arrested.

The police handed the men’s exhibit, drugs to the NDLEA with evidence of high level connivance by its operatives while keeping records of visuals and recorded evidence of the interrogation undertaken on the two arrested drug traffickers of how they “settle” NDLEA officers before passing with their drugs many times.

According to Barr Ibrahim Usman, one of Kyari’s lawyer, Following the discovery made by the police, the NDLEA quickly indicted the same police men who arrested the Drug traffickers alleging that some of the drugs were tempered with and charged the Police officers to court together with the very drug traffickers they arrested and transferred to NDLEA on the same charge sheet.

The “NDLEA separately secured a plea bargain with the two suspects the police arrested with the drugs, enabling them to enter a plea deal, which secured easy guilty verdict and light sentence which will run for only two year”.

“They were convicted on 3 counts (count 5,6,7) of the charges, and handed two years jail each but Justice Emeka Nwite held it would run concurrently (that is two years),” he said.

It was gathered that everything was done quickly to enable the two drug traffickers who were given soft landing not to indict and mention NDLEA’s operatives as accessories during full trial.

Usman further explained that the agency quickly entered into the plea bargain and got light sentence for the drug traffickers so as to avoid cross examinations and full trial, that will expose NDLEA operatives already mentioned and indicted by same now convicted suspects.

The NDLEA had invited its indicted men from the Enugu Airport to Abuja few months ago following the police revelation but reposted them to various offices to avoid prying eyes.

He strongly recommended that the Attorney general of the federation and the Government of Nigeria MUST not allow these NDLEA officers in Enugu Airport clearly indicted by these convicted drug traffickers to go free in the interest of Justice and fairness to all.